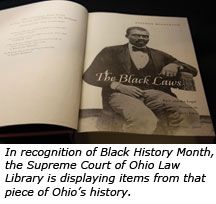 In 1804, Ohio legislature passed the first of a succession of Northern Black Laws to restrict the rights and movement of Free Blacks in the Northern states. Most North states passed Black Laws, and 3 states’ Constitution barred Black Settlers: Illinios, Indiana, Oregon.

These Black codes were laws passed to regulate the rights of free African Americans in the antebellum and post–Civil War eras. Before the Civil War, a number of midwestern states adopted black codes (or black laws) to inhibit the migration of free blacks and in other ways limit black rights. After the Civil War, most southern states adopted far more severe black codes to prevent former slaves, called freedmen at the time, from having the full rights of citizens and to reimpose, as much as possible, the labor and racial controls of slavery.

In 1804 Ohio passed an act to “regulate black and mulatto persons.” This law became the prototype for subsequent laws passed in Ohio, Indiana, Illinois, and the Michigan Territory. It required that blacks migrating to Ohio show proof of their freedom and exacted a $50 fine from any white hiring a black who did not have such proof. On its face, this law could be seen as a good-faith effort to prevent fugitive slaves from entering the state. In fact, it was primarily designed to discourage black migration.

An 1807 law raised the fine to $100 and required migrating blacks to find two sureties to guarantee their “good behavior” and assure that they would not require public assistance. Subsequent amendments to these laws prevented blacks from serving on juries and testifying against whites and severely limited their access to public schools. Although discriminatory, these laws did not prevent blacks from owning real estate, entering professions—including law and medicine—or exercising freedom of speech, press, assembly, and worship. Moreover, once blacks were legally present in a state, the black codes of the North did not inhibit their geographic mobility.

These laws were generally ineffective in limiting the growth of the free black population. From 1803 to 1860, Ohio’s black population actually grew at a slightly faster rate than did its white population. Between 1830 and 1860, Indiana, Illinois, and Ohio all saw over 300 percent growth in their black populations. Little evidence exists that migrating blacks were generally asked to prove their freedom or that anyone enforced the requirement that migrating blacks find sureties to sign bonds for them. In addition, no cases are on record of any whites being fined for hiring blacks who failed to provide proof of their freedom.

In 1849 Ohio repealed most of its black codes, including those provisions discouraging black migrants from coming to the state. The repeal was part of an elaborate legislative compromise that also sent the abolitionist Salmon P. Chase to the U.S. Senate. Indiana and Illinois retained their discriminatory laws until after the Civil War. Iowa, California, and Oregon also adopted some aspects of the northern black codes, but Iowa and California dropped virtually all these rules before or during the Civil War.

By the end of the Civil War, blacks in the North had substantial equality under the law, except that in most states they could not vote or serve on juries. These disabilities based on race disappeared after the ratification of the Fifteenth Amendment in 1870. After 1870, some northern states still prohibited marriages between blacks and whites, but otherwise most remnants of the black codes were no longer on the books.

In the South, the situation was far different. The loss of the war and the emancipation of four million slaves immediately and dramatically affected southern society. Emancipation upset the system of racial control that had kept blacks subordinate to whites since the seventeenth century, and also destroyed the economic relationship that had allowed planters to count on a pliable and ever-present source of labor. With slavery gone, the legal status of the freedmen and their role in the postwar South were uncertain. Immediately after the war, southern legislatures began to adopt black codes to define the status of former slaves and to cope with the emerging problems resulting from Emancipation.