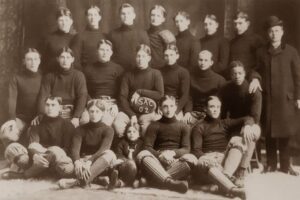 He was raised in Wooster, Ohio where he played baseball and football for Wooster High School where participated in organizing and establishing the first varsity football team. He was a right halfback and served as team captain on a squad that had no losses that year, after graduating in 1901 he entered Wooster College. Instead of playing football for the College, he played for the amateur Wooster Athletic Association, rather than the college squad. This is where he would earn the nickname, “The Black Cyclone.”

At the end of the 1901 season, Wooster played the Shelby Blues in a two-game series. Follis’ performance brought him to the attention of the Shelby team manager, Frank C. Schiffer, who decided he wanted Follis to play with his team, not against them. He secured Follis for his team and set him up with a job at Howard Seltzer and Sons Hardware Store in Shelby, Ohio. Charles’ working hours were arranged so that he could both practice and play football.

In 1902 and 1903, the six-foot, 200 pound Follis played for Shelby Athletic Club and signed a contract with the Shelby Athletic Club, later becoming the Shelby Blues. This contract confirmed Follis to be the first professional African American football player and where he became team mate with Branch Rickey, the Ohio Wesleyan University student and future Brooklyn Dodger who would sign Jackie Robinson to integrate major league baseball in 1947

Like other players who integrated sport teams faced discrimination, so did Follis. The players on opposing teams targeted Follis with rouh play that resulted in injuries. At a game in Toledo in 1905, fans taunted him with racial slurs until the Teledo team captain addresses the crowd and asked them to stop. While in Shelby, Follis joined his teammates at a local tavern after a game; the owner denied him entry.

In 1906, the Blues became an entirely open professional team. Charles missed the early part of the season due to an injury, however he did return in the second half of the season. Finally, on Thanksgiving Day 1906, while playing against the Franklin Athletic Club of Cleveland, he suffered another injury, though this one ended his career.

Follis was also the first black catcher to move from college baseball into the Negro Leagues. During the 1901 and 1902 seasons, while playing for Wooster University, Follis became well known in the Ohio college circuit. His closest competitor at the position, was Branch Rickey of nearby Ohio Wesleyan University.
In 1902, he left Wooster University and by 1909 he was catching for the Cuban Giants. He became the Giants’ star catcher, their leading slugger and their most popular player.

Follis was credited with many stolen bases, double plays, and even two triple plays in his career. However, he had a better reputation as a power hitter. On May 16, 1906, Buttons Briggs, a pitcher formerly of the National League’s Chicago Cubs, was brought in by Elyria to pitch against the Wooster Giants. This moved was intended to intimate Wooster, since Briggs won 20 games in 1905. However Follis as the lead-off batter in the first inning, first ball hit a home run off the former major league star’s first pitch. He completed the day with four-for-six against Buttons.

In 1910, Follis died at the age of 31, from pneumonia.
While Follis’ professionalism was reported by the local press, his role as the first black professional football player was not known by sports historians until many years later. In 1975, researchers rediscovered halfback Follis’ on-the-field-achievements while reviewing old pages of the Shelby Daily Globe, with the goal to locate evidence that Follis had played as a professional. After hours of examining the tattered newspapers, researchers finally came across an article in the September 16, 1904 edition that announced Follis had signed a contract for the upcoming season.