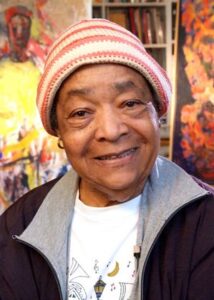 Samella Sanders Lewis (born February 27, 1924) is an African-American artist, working primarily as a printmaker and painter. She is also a published author, art historian and a former educator.

Lewis was born in New Orleans, Louisiana. Widely exhibited and collected as an artist herself, Lewis is better known as a historian, critic and collector of art, especially African-American art. Lewis has completed four degrees, five films, seven books and a substantial body of artworks which have received critical respect.

She pursued an art degree starting off at Dillard University in 1941, but left Dillard for Hampton Institute in Virginia, earning her master’s degree in 1947. She earned her B.A. degree at Hampton University, then completed her master and doctorate in art history and cultural anthropology at the Ohio State University in 1951.

She was a professor at the State University of New York and at Scripps College in Claremont, California. She co-founded, with Bernie Casey, the Contemporary Crafts Gallery in Los Angeles in 1970. In 1973, she served on the selection committee for the exhibition BLACKS: USA: 1973 held at the New York Cultural Center.

Lewis’s grandson is Bay Area artist and musician Unity Lewis. He plans to create a contemporary version of Samella Lewis’s catalog “Black Artists on Art,” which featured black artists not typically showcased in mainstream art galleries and sold thousands of copies. “I wanted to make a chronology of African American artists, and artists of African descent, to document our history. The historians weren’t doing it. I felt it better the artists do it anyway, through pictorial and written information… It was really about the movement,” Samella Lewis said of the book published in 1969 and 1971.

1960-70s Samella Lewis belonged to a group of artist that would meet every month. Lewis has been collecting art since the year 1942. She mostly collects art from WPA and the Harlem Renaissance.