Trending
You are at:Home»365 DAYS-OF-HISTORY»February 26 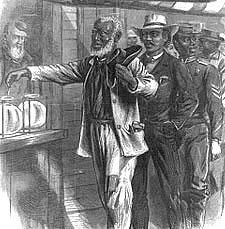 The 15th Amendment to the Constitution granted African American men the right to vote by declaring that the “right of citizens of the United States to vote shall not be denied or abridged by the United States or by any state on account of race, color, or previous condition of servitude.” Although ratified on February 3, 1870, the promise of the 15th Amendment would not be fully realized for almost a century. Through the use of poll taxes, literacy tests and other means, Southern states were able to effectively disenfranchise African Americans. It would take the passage of the Voting Rights Act of 1965 before the majority of African Americans in the South were registered to vote.