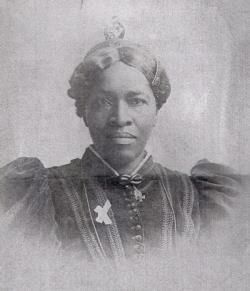 Amanda Berry Smith (January 23, 1837 – February 24, 1915) was a former slave who became an inspiration to thousands of women both black and white. She was born in Long Green, Maryland, a small town in Baltimore County. Her father’s name was Samuel Berry while her mother’s name was Mariam. Her father, a slave, worked for years at night and after long days of field labour, he had to make brooms and husk mats to pay for freedom for his whole family of 7.

Amanda taught herself how to read by cutting out large letters from newspapers and asking her mother to draw them into words. When she was thirteen, only having three and a half months of formal schooling, Amanda went to work near York, Pennsylvania, as the servant of a widow with five children. While there, she attended a revival service at the Methodist Episcopal Church.
Adult
She worked hard as a cook and a washerwoman to provide for herself and her daughter after her husband was killed in the American Civil War. Prayer became a way of life for her as she trusted God for shoes, the money to buy her sisters freedom and food for her family. She became well known for her beautiful voice and hence, opportunities to evangelize in the South and West opened up for her. Wherever she travelled, she wore a plain poke bonnet and a brown or black Quaker wrapper, and she carried her own carpetbag suitcase.
In 1876, she was invited to speak and sing in England travelling on a first class cabin provided by her friends. The captain invited her to conduct a religious service on board and she was so modest that the other passengers spread word of her and resulted in her stay in England and Scotland for a year and a half. After her trip, she returned to her homeland and eventually founded the Amanda Smith Orphans’ Home for African-American children in a suburb of Chicago. She continued to visit various nations and gained a reputation as “God’s image carved in ebony.”
Her autobiography was published in 1893.
Amanda Smith retired to Sebring, Florida in 1912.