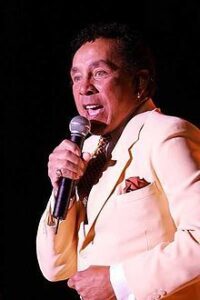 February 19, 1940 William “Smokey” Robinson, Jr., singer, songwriter, and record producer, was born in Detroit, Michigan. In 1955, Robinson co-founded a vocal group called The Five Chimes which was later renamed the Miracles. In 1959, they were one of the first groups to sign with the newly formed Motown Records. In 1961, Robinson was appointed vice-president of the company, a title that he held until Motown was sold in 1988. The Miracles’ “Shop Around” (1960) was Motown’s first number one hit on the R&B charts and their first million selling single.

In addition to singing, Robinson wrote and produced for other artists, including “My Guy” for Mary Wells, “Since I Lost My Baby” for The Temptations, “Don’t Mess with Bill” for The Marvelettes, and “First I Look at the Purse” for The Contours. Over his career, Robinson has more than 4,000 songs to his credit. In 1999, Robinson received the Grammy Lifetime Achievement Award and in 2006 he was a Kennedy Center honoree for lifetime achievement in the performing arts. In 2002, he was presented the National Medal of Arts, the highest honor bestowed on an individual artist by the United States, by President George W. Bush.