Trending
You are at:Home»365 DAYS-OF-HISTORY»February 2 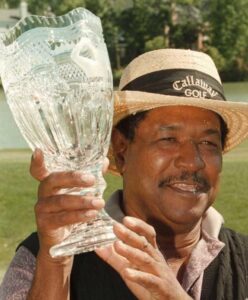 February 2, 1935 Pete Brown, the first African American to win a Professional Golfers Association Tour event, was born in Port Gibson, Mississippi, but grew up in Jackson, Mississippi. Brown started in golf as a caddy at the municipal golf course. He received his PGA Tour card in 1963 and in 1964 won the Waco Turner Open, the first African American to win a PGA event. Brown played on the PGA Tour for 17 years and won one other PGA event, the 1970 Andy Williams – San Diego Open Invitational. Brown had 12 additional professional wins before joining the Senior PGA Tour in 1985.