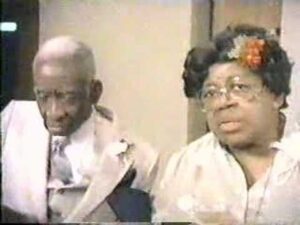 Willie Mae Ford died onFebruary 2, 1994, also known as Mother Willie Mae Ford Smith, was an American gospel singer considered the greatest of the “anointed singers,” she lived according to her ministry. She rarely recorded, and she approached touring as her outlet to evenaglize. She was among the most legendary gospel vocalists of her area. Ford was the first to introduce the “song and sermonette,” an act of delivering a lengthy sermon before, during or after a performance, similar introducing the “song and sermonette” style that other singers, such as Shirley Caesar and Edna Gallmon Cooke, made popular.

Born in Rolling Fork, Mississippi on June 23, 1904, her family moved to Memphis, Tennessee when she was a child. She moved to St. Louis, Missouri at the age of 12. Raised in the Baptist church, she began singing with her sisters, Mary, Geneva, Lucille, and Emma, in a family group known as “The Ford Sisters”. The group and Willie Mae in particular, achieved wider fame after an appearance at the 1922 National Baptist Convention. Debuting at the National Baptist Convention in 1922, the Fords created a sensation with their performances of “Ezekiel Saw the Wheel” and “I’m in His Care.”

When the group dismantled, she mounted a solo career, a high soprano, she briefly flirted with pursuing classical music, instead she was moved by Detroit’s Madame Artelia Hutchins’ performance at the 1926 Baptist Convention that she returned to gospel. She married James Peter Smith in 1927, whom operated a general hauling business, and when they began to struggle she started touring to help support their family. She was arguably the first gospel performer to tour relentlessly, and in her travels her path crossed with Thomas A. Dorsey, who in 1932 invited her again, to help organize the National Convention of Gospel Choirs and Choruses.

The organization devoted to spreading gospel music by training singers, choirs and composers. Smith became the principal singing teacher for the NCGCC as head of its Soloists’ Bureau in 1936. Among her students was Brother Joe May, who gave her the affectionate name “Mother”. Teaming with Roberta Martin, Smith demonstrated how to make even familiar hymns such as “Jesus Loves Me” into deeper personal statements by slurs, note bending and other personalized adornments.
As a teacher, Smith also mentored Brother Joe May, Myrtle Scott, Edna Gallmon Cooke, and Martha Bass.

She joined the Church of God Apostolic in 1939, and immediately her music reflected the rhythm and energy of the sanctified church; still, she did not finally begin recording until the end of the following decade — with her protégé May enjoying massive success with her style, she saw no point in entering the studio. Only a handful of Smith recordings were issued in her own lifetime, and by the early ’50s, she had turned to evangelical work; still, she continued to remain a great inspiration, dying on February 2, 1994.

Smith was also a major figure within the Baptist Church as the Director of its Education Department of the National Baptist Convention before she became a member of a Pentecostal denomination, the COGIC. She considered herself a preacher and imbued her singing and sermonettes with an evangelical fervor. She was noted for her finesse, control and subtlety, but could also, like her protégé Brother Joe May, belt out hymns.

She developed a fine sensitivity to slights from others who did not appreciate her firm sincerity or thought she could be cheated. She also developed a rivalry with Sallie Martin that lasted for as long as they lived; the movie Say Amen, Somebody! Filmed when both of them were in their seventies, showed that the fires had only gone down; not out. She had two biological children, Billie and Jackie, and an adopted daughter who was also her accompanist, Bertha.