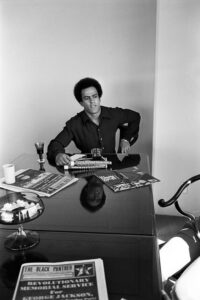 Huey Percy Newton, co-founder and leader of the Black Panther Party for Self-Defense, was born in Monroe, Louisiana, but raised in Oakland, California. In October, 1966, while at Oakland City College, he and Bobby Seale organized the Black Panther Party for Self-Defense with Seale as chairman and Newton as minister of defense. In September, 1968, Newton was convicted of voluntary manslaughter for the death of a policeman and sentenced to 2 to 15 years in prison. In May, 1970, the California Appellate Court reversed the conviction and ordered a new trial and after two subsequent mistrials, the State of California dropped the case. In 1977, Newton was acquitted of the murder of a prostitute after two trials ended in deadlock. Newton was fatally shot on August 22, 1989. In 1996, a one man play, “A Huey P. Newton Story,” was performed on stage and then turned into an award winning 2001 film. Several biographies have been published about Newton, including “Seize the Time: The Story of the Black Panther Party and Huey P. Newton” (1970) and “Huey: Spirit of the Panther” (2006).