Trending
You are at:Home»365 DAYS-OF-HISTORY»February 13 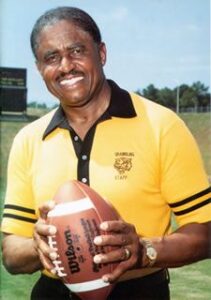 February 13, 1919 Edward G. Robinson, hall of fame football coach, was born in Jackson, Louisiana. Robinson earned his Bachelor of Arts degree at Leland College in 1941 and in 1954 earned his Master of Arts degree from the University of Iowa. He began coaching at the historically black Grambling State University in 1941 and over the next 56 years compiled a record of 408 wins, 165 losses, and 15 ties. More than 200 of his players went on to play professional football, including hall of famers Buck Buchanan, Willie Brown, Charlie Joiner, and Willie Davis. Robinson retired in 1997 and published his autobiography, “Never Before Never Again: The Autobiography of Eddie Robinson,” in 1999. He was inducted into the College Football Hall of Fame in 1997 and died April 3, 2007. The Football Writers Association of America’s Eddie Robinson Award is given annually to college football’s top head coach in Division I-AA and the Grambling football facility is named Eddie Robinson Stadium. The Eddie G. Robinson Museum opened in 2010 on the campus of Grambling.