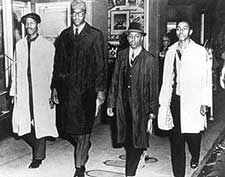 Dr. Martin Luther King, Jr remained the major spokesperson for black aspirations, however, as in Montgomery, little-known individuals initiated most subsequent black movements. On February 1, 1960, four freshmen at North Carolina Agricultural and Technical College began a wave of student sit-ins designed to end segregation at southern lunch counters. These protests spread rapidly throughout the South and led to the founding, in April 1960, of the Student Non-Violent Coordinating Committee (SNCC). This student-led group, even more aggressive in its use of nonviolent direct action tactics than King’s SCLC, stressed the development of autonomous local movements in contrast to SCLCs strategy of using local campaigns to achieve national civil rights reforms.

On Feb. 1, 1960, four black college students, Joseph McNeil, Franklin McCain, David Richmond and Ezell Blair, sat down at a “whites-only” lunch counter at a Woolworth’s in Greensboro, N.C., and refused to leave after being denied service. Additional students joined them over the following weeks and months, and sit-in protests spread through North Carolina to other states in the South.
The New York Times reported on the growing movement in its Feb. 15 edition. It noted: “The demonstrations were generally dismissed at first as another college fad of the ‘panty-raid’ variety. This opinion lost adherents, however, as the movement spread from North Carolina to Virginia, Florida, South Carolina and Tennessee and involved fifteen cities. Some whites wrote off the episodes as the work of ‘outside agitators.’ But even they conceded that the seeds of dissent had fallen in fertile soil.”
Segregated lunch counters were common in the South because of numerous Jim Crow laws, which also kept public buildings and sites like libraries, parks, theaters, swimming pools and water fountains segregated. The sit-in protests drew public attention to these injustices through non-violent civil disobedience.

Reactions to the sit-in protesters varied by restaurant and in many places, groups of white men gathered around the protesters to heckle them and there was occasional violence. “In a few cases the Blacks were elbowed, jostled and shoved. Itching powder was sprinkled on them and they were spattered with eggs,” The Times reported. “At Rock Hill, S.C., a Negro youth was knocked from a stool by a white beside whom he sat. A bottle of ammonia was hurled through the door of a drug store there. The fumes brought tears to the eyes of the demonstrators.” Many managers closed their counters rather than deal with the protests.

The sit-ins helped to draw young people into the civil rights movement and create new leaders and organizations. The Student Nonviolent Coordinating Committee, which would become an influential organization in the movement, was founded at a conference of sit-in leaders.

The sit-in protests were successful in integrating lunch counters, including the Greensboro Woolworth’s, which gave in to to the protesters in July 1960. Four years later, segregation of public places was made illegal when Congress passed the Civil Rights Act of 1964.