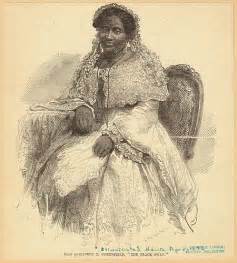 dubbed “The Black Swan“, was an African American singer considered the best-known black concert artist of her time. She was noted by James M. Trotter for her “remarkably sweet tones and wide vocal compass”.

Greenfield was born a slave in Natchez, Mississippi, but was adopted by a Philadelphia Quaker as an infant. She studied music as a child although it was forbidden by the Quakers with whom she associated. At this point she began to sing at private parties. Her concert debut was in 1851 presented for the Buffalo Musical Association. From 1851–53 she toured as managed by Colonel J.H. Wood.

In 1853, she debuted at Metropolitan Hall in New York, which held an audience of four thousand, white patrons only. After the concert, Greenfield apologized to her own people for their exclusion from the performance and gave a concert to benefit the Home of Aged Colored Persons and the Colored Orphan Asylum.

In April 1853, she went to London under the patronage of the Duchess of Sutherland and Harriet Beecher Stowe. She was taught by Queen Victoria’s Chapel Royal organist, George Smart. She performed a command performance for the queen at Buckingham Palace on May 10, 1854; she was the first black performer to perform before royalty.