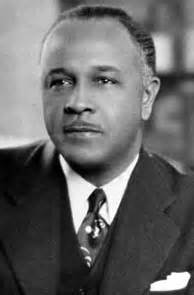 Born in 1899 in Montgomery, Alabama, Dr. Percy Julian was one of the most famous Black scientists. Just as George Washington Carver demonstrated what could be done with the ordinary peanut, Dr. Julian took the soybean, which was until this time just another bean, and extracted from it an ingredient to relieve inflammatory arthritis. Until the late thirties Europe had a monopoly on the production of sterol, the basis of Dr. Julian’s research. These sterol were extracted from the bile of animals at a cost of several hundreds of dollars a gram. Substituting sterol from the oil of soybean, Dr. Julian reduced the cost of sterol to less than twenty cents a gram, thus making cortisone, a sterol derivative, available to the needy at a reasonable cost. In 1954 he founded Julian Laboratory, Inc. With research centers in Chicago, Mexico City, and Guatemala, where he successfully developed synthetic cortisone. Before his death of liver cancer, Dr. Julian found a way to mass produce the drug physostigmine, used to treat glaucoma, and perfected the mass production of sex hormones which led the way to birth control pills. Dr. Julian died in 1975.