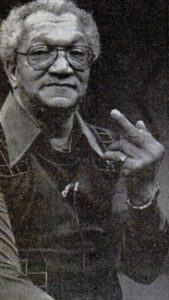 John Elroy Sanford (December 9, 1922 – October 11, 1991), known professionally as Redd Foxx, was an American comedian and actor, best remembered for his explicit comedy records and his starring role on the 1970s sitcom Sanford and Son
Foxx gained notoriety with his raunchy nightclub acts during the 1950s and 1960s. Known as the “King of the Party Records”, he performed on more than 50 records in his lifetime.

He also starred in Sanford, The Redd Foxx Show and The Royal Family. His film roles included All the Fine Young Cannibals (1960) and Harlem Nights (1989).

In 2004, Comedy CentralPresents: 100 Greatest Stand-ups of All Time ranked Foxx as the 24th best stand-up comedian. Foxx not only influenced many comedians, but was often portrayed in popular culture as well, mainly as a result of his famous catchphrases, body language and facial expressions exhibited on Sanford and Son.

Foxx was born in St. Louis, Missouri and raised on Chicago’s South Side. His father, Fred Sanford an electrician and auto mechanic from Hickman, Kentucky, left his family when Foxx was four years old. He was raised by his half-Seminole Indian mother, Mary Hughes from Ellisville, Mississippi, his grandmother and his minister.

He attended DuSable High School with future Chicago mayor Harold Washington. Foxx had an older brother, Fred G. Sanford Jr., who provided the name for his character on Sanford and Son.

On July 27, 1939, Foxx performed on the Major Bowes Amateur Hour radio show as part of the Jump Swinging Six.
In the 1940s, he was an associate of Malcolm Little, later known as Malcolm X. In Malcolm’s autobiography, Foxx is referred to as “Chicago Red, the funniest dishwasher on this earth.” He earned the nickname because of his reddish hairand complexion His surname was taken from baseball star Jimmie Foxx.

During World War II, Foxx dodged the draft by eating half a bar of soap before his physical, a trick that resulted in heart palpitations.

On September 30, 1946, Foxx recorded five songs for the Savoy label under the direction of Teddy Reig. Foxx known his raunchy nightclub act during the 1950s, 1960s, and 1970s. His big break came after singer Dinah Washington insisted that he come to Los Angeles, where Dootsie Williams of Dootone records caught his act at the Brass Rail nightclub.

Foxx was signed to a long-term contract and released a series of comedy albums that quickly became cult favorites.
He was also one of the first black comics to play to white audiences on the Las Vegas Strip. He used his starring role on Sanford and Son to help get jobs for his acquaintances such as LaWanda Page, Slappy White, Gregory Sierra, Don Bexley, Beah Richards, Stymie Beard, Leroy Daniels, Ernest Mayhand and Noriyuki “Pat” Morita.

Foxx achieved his most widespread fame starring in the television sitcom Sanford and Son, an adaptation of the BBC series Steptoe and Son. The series premiered on the NBC television network on January 14, 1972 and was broadcast for six seasons. The final episode aired on March 25, 1977.

Foxx played the role of Fred G. Sanford (“Fred Sanford” was actually Foxx’s father’s and brother’s name), while Foxx’s co-star Demond Wilson played the role of his son Lamont. In this sitcom, Fred and Lamont were owners of a junk/salvage store who dealt with many humorous situations that would arise. The series was notable for its racial humor and overt prejudices which helped redefine the genre of black situation comedy.

The show also had several running gags. When angry with Lamont, Fred would often say “You big dummy” or would often fake heart attacks by putting his hand on his chest and saying (usually while looking up at the sky) “It’s the big one, I’m coming to join ya honey/Elizabeth” (referring to his late wife Elizabeth).

Fred would also complain about having arthritis to get out of working by showing Lamont his cramped hand. Foxx depicted a character in his 60s, although in real life he was younger.