Samuel George Davis Jr. (December 8, 1925 – May 16, 1990) was an American singer, dancer, actor and comedian. He was noted for his impersonationsof actors, musicians and other celebrities. At the age of 3, Davis began his career in vaudeville with his father and Will Mastin as the Will Mastin Trio, which toured nationally. After military service, Davis returned to the trio. Davis became an overnight sensation following a nightclub performance at Ciro’s (in West Hollywood) after the 1951 Academy Awards. With the trio, he became a recording artist. In 1954, he lost his left eye in a car accident, and several years later, he converted to Judaism.

Davis was a victim of racism throughout his life, particularly during the pre-Civil Rights era, and was a large financial supporter of the Civil Rights Movement. Davis had a complex relationship with the black community, and drew criticism after publicly supporting President Richard Nixon in 1972 (although he later returned to being a Democrat). One day on a golf course with Jack Benny, he was asked what his handicap was. “Handicap?” he asked. “Talk about handicap. I’m a one-eyed Negro Jew.” This was to become a signature comment, recounted in his autobiography, and in countless articles.

After reuniting with Sinatra and Dean Martin in 1987, Davis toured with them and Liza Minnelli internationally, before he died of throat cancer in 1990. He died in debt to the Internal Revenue Service, and his estate was the subject of legal battles.

Davis was awarded the Spingarn Medal by the NAACP and was nominated for a Golden Globe Award and an Emmy Award for his television performances. He was the recipient of the Kennedy Center Honors in 1987, and in 2001, he was posthumously awarded the Grammy Lifetime Achievement Award.

Samuel George Davis Jr. was born on December 8, 1925, in the Harlem section of Manhattan in New York City, the son of entertainer and stage performer, Sammy Davis Sr. (1900–1988), an African-American entertainer, and Elvera Sanchez (1905–2000), an Afro-Cuban tap dancer. During his lifetime, Davis stated that his mother was Puerto Rican and born in San Juan.

However, in the 2003 biography In Black and White, author Wil Haygood writes that Davis’s mother was born in New York City to parents of Cuban, Afro-Cuban, and African-American descent, and that Davis claimed he was Puerto Rican because he feared anti-Cuban backlash would hurt his record sales.
Davis’s parents were vaudeville dancers. As an infant, he was reared by his paternal grandmother. When he was three years old, his parents separated. His father, not wanting to lose custody of his son, took him on tour. 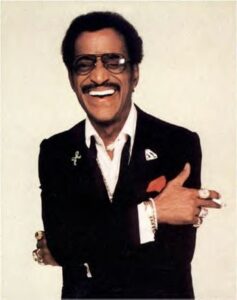 However, when Davis served in the United States Army during World War II, he was confronted by strong racial prejudice. He later said: “Overnight the world looked different. It wasn’t one color any more. I could see the protection I’d gotten all my life from my father and Will. I appreciated their loving hope that I’d never need to know about prejudice and hate, but they were wrong. It was as if I’d walked through a swinging door for 18 years, a door which they had always secretly held open.” At age 7 Davis played the title role in the film Rufus Jones for President, in which he sang and danced with Ethel Waters Davis lived for several years in Boston’s South End, and reminisced years later about “hoofing and singing” at Izzy Ort’s Bar & Grille.