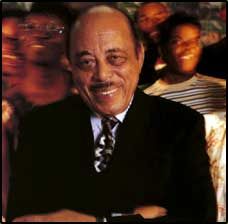 December 7, 1931 Comer Cottrell, businessman, was born in Mobile, Alabama. Cottrell graduated from the University of Detroit in 1952 and worked as a sales manager at Sears Roebuck from 1964 to 1969. In 1970 with $600, a borrowed typewriter and a rundown 700 square foot warehouse, he started Pro-Line Company, a cosmetics company that manufactured products for the African American community.

Within five years, Pro-Line had its own distribution center in Birmingham, Alabama and by 1980 the company had grown so large that it was necessary to move to a larger facility in Dallas, Texas. By 1989, Pro-Line was number 19 on Black Enterprise’s list of top 100 black businesses with annual sales of $36 million worldwide.

Also that year, Cottrell became a part owner of the Texas Rangers, the first African American to hold such a stake in a Major League baseball team. In 1990, Cottrell became a hero to higher education for blacks when he bought and restored the campus of bankrupt Bishop College and transferred it to Paul Quinn College. Cottrell became a trustee of Northwood University and a member of the Dallas Chamber of Commerce. He is also the founder of FCC Investment Corporation.

He briefly attended the University of Detroit and served in the Air Force during the Korean War. He founded Pro-Line Corp. in 1970. It was originally based in Los Angeles. In 1979, he created the Curly Kit and in 1980, he moved the company to Dallas. Forbes Magazine called the Curly Kit “the biggest single product ever to hit the black cosmetics market.”

In 2000, he sold the company to Alberto-Culver for $75 million to $80 million. With his brother, James, he turned Pro-Line into one of the most successful black-owned companies in the United States.