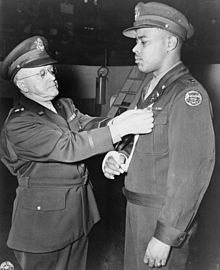 December 14, 1944 Second Lieutenant Charles Leroy Thomas led a task force in the capture of Climbach, France during World War II. Thomas’ citation partially reads, “While riding in the lead vehicle of a task force organized to storm and capture ………….,

Lt. Thomas’ armored scout care was subjected to intense enemy artillery, self-propelled gun, and small arms fire. Although wounded by the initial burst of hostile fire, Lt. Thomas signaled the remainder of the column to halt and, despite the severity of his wounds, assisted the crew of the wrecked car in dismounting.

Upon leaving the scant protection which the vehicle afforded, Lt. Thomas was again subjected to a hail of enemy fire which inflicted multiple gunshot wounds to his chest, legs, and left arm. Despite the intense pain caused by these wounds, Lt. Thomas ordered and directed the dispersion and emplacement of two antitank guns which in a few moments were promptly and effectively returning the enemy fire.

Realizing that he could no longer remain in command of the platoon ……….. Only after he was certain that his junior officer was in full control of the situation did he permit himself to be evacuated.” For his bravery under fire, Thomas was awarded the Distinguished Service Cross.

Thomas was born April 17, 1920 in Alabama. After the war, Thomas remained in the army and retired as a major. Thomas died February 15, 1980. As the result of studies indicating discrimination in the process of awarding medals during World War II, Thomas was posthumously awarded Medal of Honor, America’s highest military decoration, on January 13, 1997.