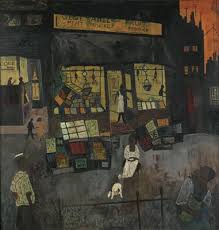 Vincent Decosta Smith started a career that spanned half a century, as a painter Vincent Smith documented in brilliant color some of the most compelling events in twentieth-century America.

From the be-bop-fueled improvisation of 1940s Harlem jazz clubs, to the visceral tug of civil rights workers confronting deep-seated hate with soul-clearing hope, to the creative militancy of the Black Arts Movement, Smith was there, brush in hand, bearing witness.

“A figurative painter with an often subtle, social thrust, he placed his subjects in a stylized way against geometric, textured and intricately colored backgrounds,” noted the New York Times. “I always knew that I was either going to do something or do nothing,” he told American Visions. “And when I thought of myself as a painter, I dreamed of myself as a great painter.” He succeeded.

Vincent Dacosta Smith was born on December 12, 1929, in New York and raised in Brooklyn by his parents, Louise and Beresford Smith. As a high school student he preferred sketching to studying and at fifteen he dropped out. “I was a good student, but I got into trouble,” he admitted to American Visions.

Soon he and a friend began hanging around the Bowery district of Manhattan. “There were hundreds of bars. There were guys sleeping all over the street, people sleeping in the back of the bars,” Smith told American Visions. “We used to go down there and hang out and drink with those guys and sit around and talk.”

Many of those men worked on the railroads and filled Smith’s head with visions of life on the road. “They hopped on a train, and then when they got where they’re going, they hopped off. My friend and I thought that sounded exciting, so we went to the office and signed up.”

At the age of 16 Smith began life as a hobo. He also began to open his eyes. “My first social awareness came about in 1947 while I was working on the Lackawanna Railroad—repairing the tracks, listening to the chants, visiting bars and roadhouses, and looking into the faces of the people who lived near the tracks in rural communities,” American Visions quoted him as writing.

After hopping off his last train, Smith signed up for a one-year stint in the Army. In 1949 he returned to Brooklyn and landed a job in the post office. He was not thrilled, however; something was missing in his life.

When a friend invited him to the Museum of Modern Art to see a Cezanne retrospective, he found out what it was. “Something told me when I walked into the museum that this was where I belonged,” he told American Visions. “I always knew that I would do art, but you know how you carry something around with you, and you know that one day it will surface, but you don’t know when.”

With that insight, Smith set about becoming an artist. “I came away so moved with a feeling that I had been in touch with something sacred,” he was quoted in a profile on the Afro American Newspapers Web site. “For a year afterward I haunted the libraries reading everything I could get my hands on about art, literature, philosophy, religion, existentialism—you name it—I touched on it somewhere.”

Once he decided to be a painter, Smith immersed himself in art, not only as a student but as a working artist. His work was featured in over 25 one-man shows and more than 30 group shows. He received dozens of awards, grants, and fellowships.

In the 1970s he was awarded a fellowship to paint and travel in Africa. He was an instructor at the Whitney Museum Art Resource Center and artist-in-residence at the Smithsonian Conference Center in Maryland and Cité des Arts International in Paris.

Dozens of prominent museums added his works to their permanent collections, including the Art Institute of Chicago, the Detroit Institute of Arts, the Museum of Fine Arts in Boston, and the Library of Congress in Washington, D.C. Coming around full circle, the Museum of Modern Art in New York, where Smith was first inspired to paint, also added his work to its collection.