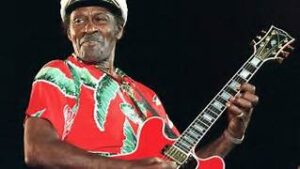 American rock music guitarist, singer, and songwriter, b. San Jose, Calif. He was brought up in St. Louis, Mo., where he still lives. Berry is widely regarded as one of the leading pioneers of rock music, having blended the blues with country music and added a rhythm-and-blues beat, and he is thought by many to be the inventor of the rock music form. His distinctive playing of the electric guitar and his witty lyrics were a major inspiration for the English pop renaissance and for a wide variety of other rock musicians. A dynamic performer, he also became known for his signature crouching and gliding “duck walk.” Berry produced a string of hits in the late 1950s, including “Maybellene,” “Rock and Roll Music,” “Roll Over Beethoven,” and “Johnny B. Goode.” In 1962 he was sentenced to two years in prison on the charge of transporting a minor across state lines for immoral purposes. His creative output subsequently dwindled and he cut his last record in 1981, butt he continued to be an active and popular performer into the 21st cent. Berry was inducted into the Rock and Roll Hall of Fame in 1986.