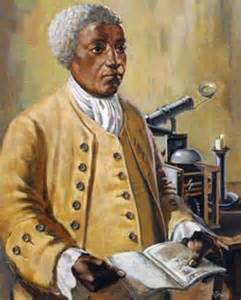 Born on November 9, 1731 near Elliott City, Maryland, Benjamin Banneker was one of America’s greatest intellectuals and scientists. Benjamin Banneker was an essayist, inventor, mathematician, and astronomer.   Because of his dark skin and great intellect he was called the “sable genius,” Benjamin Banneker was a self-taught mathematician and astronomer.   While still a youth he made a wooden clock which kept accurate time past the date that Banneker died.   This clock is believed to be the first clock wholly made in America.   In 1791, he served on a project to make a survey for the District of Columbia, helping to design the layout for our Nation’s capital.   Deeply interested in natural phenomena, Banneker started publishing an almanac in 1791 and continued its publication until 1802.   He published a treatise on bees, did a mathematical study on the cycle of the seventeen-year locust, and became a pamphleteer for the anti-slavery movement.   He was internationally known for his accomplishments and became an advisor to President Thomas Jefferson. He died on his farm on October 9, 1806.