Trending
You are at:Home»365 DAYS-OF-HISTORY»August 7 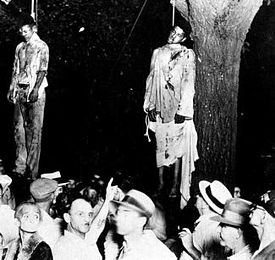 August 7, 1930 Thomas Shipp and Abram Smith were lynched in Marion, Indiana. Shipp and Smith had been arrested and charged with robbing and murdering a white factory worker and raping his girlfriend. A mob of townspeople broke into the jail, beat the two men and hanged them. Police officers cooperated in the lynching. A picture of the lynching was widely circulated and included in the exhibition “Without Sanctuary: Lynching Photography in America” which was on exhibit at the Charles H. Wright Museum of African American History in Detroit, Michigan in 2004. The picture also inspired the poem “Strange Fruit” (1936) by Abel Meeropol. The poem later became the lyrics for the song of the same name popularized by Billie Holiday and Nina Simone. A third African American man, James Cameron, had also been arrested and narrowly escaped being lynched. Cameron went on to found America’s Black Holocaust Museum which is dedicated to the history of lynching in Milwaukee, Wisconsin in 1988. Cameron died June 11, 2006.