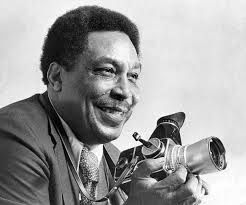 Ernest C. Withers (August 7, 1922 – October 15, 2007) was an American photojournalist. He is best known for capturing over 60 years of African American history in the segregated South, with iconic images of the Montgomery Bus Boycott, Emmett Till, Sanitation Worker’s Strike, Negro league baseball, and musicians including those related to Memphis blues and Memphis soul.

Ernest Withers work has been archived by the Library of Congress and has been slated for the permanent collection of the Smithsonian Institution’s in-progress National Museum of African American History and Culture, in Washington, D.C.

Ernest C. Withers was born in Memphis, Tennessee, to Arthur Withers and Pearl Withers of Marshall County, Mississippi; he had a step-mother known as Mrs. Minnie Withers. Ba Ba [Father] Withers exhibited interest in photography from a young age.

He took his first photograph in high school after his sister gave him a camera she received from a classmate. He met his wife Dorothy Curry of Brownsville, Tennessee (they remained married for 66 years), at Manassas High School in Memphis, Tennessee.

During World War II he received training at the Army School of Photography. After the war, Withers served as one of Memphis’ first African-American police officers.

Withers was active for approximately 60 years, with his most noted work being the images captured of the Civil Rights Movement.
He traveled with Martin Luther King Jr. during his public life.

Withers’ coverage of the Emmett Till murder trial brought national attention to the racial violence taking place during the 1950s in Mississippi, among other places. Withers appeared in a TV documentary about the murdered 14-year-old entitled The American Experience: The Murder of Emmett Till.

Withers served as official photographer for Stax Records for 20 years.

Between 1 million and 5 million images are estimated to have been taken during Withers’ career, with current efforts in progress for preservation and digitization.