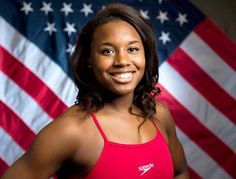 In winning the 100-meter freestyle, a tie with Penny Oleksiak of Canada, Manuel became the first African-American woman to win an individual Olympic gold in swimming and set an Olympic record and an American record.

Manuel also holds three world records as a member of a relay team, and she is a two-time individual National Collegiate Athletic Association champion, becoming one of the first three African American women to place in the top three spots in the 100-yard freestyle event in any Division I NCAA Swimming Championship. Since 2014, she has attended Stanford University, where she swims for the Stanford Cardinal.

Simone Manuel was born in Sugar Land, Texas, on August 2, 1996. She has two older brothers, one of whom played basketball for Southern Methodist University. Her parents encouraged competitive sports in the three children, and Manuel was introduced to swimming through her brothers, who swam summer league competition.

She asked to join the swimming team at four, and she was enrolled in swimming lessons. She was swimming with her local club, First Colony Swim Team, by eleven, and there she swam under head coach Alison Beebe, whom Manuel cited as a significant teacher. She graduated from Fort Bend Austin High School in 2014 and started attending Stanford University the same year.