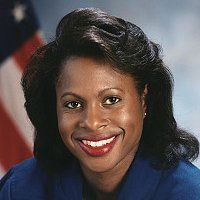 Joan Elizabeth Higginbotham, the third African American woman to go into space, was born in Chicago, Illinois. Higginbotham earned her Bachelor of Science degree in electrical engineering from Southern Illinois University in 1987 and her Masters of Management Science and Masters in Space Systems from the Florida Institute of Technology in 1992 and 1996, respectively.

She began her career at the National Aeronautics and Space Administration (NASA) in 1987 as a payload electrical engineer. Within six months, she became the lead for the orbiter experiments on the Space Shuttle Columbia.

Two years later, she was promoted to lead orbiter project engineer. Higginbotham was selected as an astronaut candidate in 1996 and from December 9 to December 22, 2006 logged 308 hours in space aboard STS-116. She retired from NASA in 2007, having actively participated in 53 space shuttle launches.

She also serves on the board of Afterschool Alliance, a national organization working to ensure that all children have access to affordable, quality afterschool programs. In 2007, Higginbotham received the Adler Planetarium Women in Space Science Award.