Trending
You are at:Home»365 DAYS-OF-HISTORY»August 22 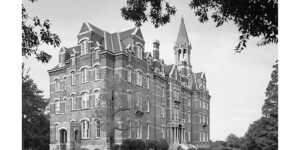 August 22, 1867 Fisk University was incorporated under Tennessee law with “a dream of an educational institution that would be open to all, regardless of race, and that would measure itself by the highest standards, not of Negro education, but of American education at its best.” The school was named after General Clinton B. Fisk of the Tennessee Freedmen Bureau. Fisk is a private historically black university founded in 1866 in Nashville, Tennessee, United States. The 40-acre (160,000 m2) campus is a historic district listed on the National Register of Historic Places. In 1930, Fisk was the first African-American institution to gain accreditation by the Southern Association of Colleges and Schools. Accreditation for specialized programs quickly followed. In 1866, six months after the end of the American Civil War, leaders of the northern American Missionary Association (AMA) – John Ogden, Reverend Erastus Milo Cravath, field secretary; and Reverend Edward Parmelee Smith – founded the Fisk Free Colored School, for the education of freedmen. Enrollment jumped from 200 to 900 in the first several months of the school, indicating freedmen’s strong desire for education, with ages of students ranging from seven to seventy. General Clinton B. Fisk of the Tennessee Freedmen Bureau allowed unused barracks available for the school, as well as establishing the first free schools for white and black children in Tennessee. In addition, he endowed Fisk with a total of $30,000. The American Missionary Association’s work was supported by the United Church of Christ, which retains an affiliation with the university. Fisk opened to classes on January 9, 1866.