Trending
You are at:Home»365 DAYS-OF-HISTORY»August 21 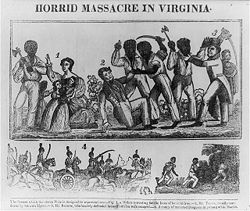 August 21, 1831 Nat Turner’s rebellion began in Southampton County, Virginia. Turner was an enslaved black man who started with a few trusted fellow slaves and grew into more than 50 enslaved and free blacks. The rebels traveled from house to house, freeing slaves and killing their white owners. The rebellion was suppressed within 48 hours with 55 white men, women and children killed. Turner was captured on October 30. On November 5 he was convicted and sentenced to death and he was hung on November 11, 1831. The state executed 56 other blacks suspected of being involved in the uprising and another 200 blacks, most of whom had nothing to do with the uprising, were beaten, tortured, and murdered by angry white mobs. Also, the Virginia General Assembly passed new laws making it unlawful to teach enslaved or free blacks or mulattoes to read or write and restricting blacks from holding religious meetings without the presence of a licensed white minister. “The Confessions of Nat Turner,” a novel, won the Pulitzer Prize for fiction in 1968 and a film, “Nat Turner: A Troublesome Property,” was released in 2003. Turner’s name is enshrined in the Ring of Genealogy at the Charles H. Wright Museum of African American History in Detroit, Michigan.