Trending
You are at:Home»365 DAYS-OF-HISTORY»August 19 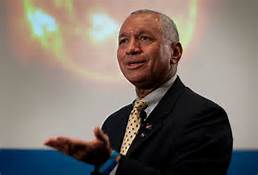 August 19, 1946 Charles Frank Bolden, Jr., the first African American Administrator of the National Aeronautics and Space Administration, was born in Columbia, South Carolina. Bolden earned his Bachelor of Science degree in electrical science from the United States Naval Academy in 1968 and his Master of Science degree in systems management from the University of Southern California in 1977. Following graduation from the Naval Academy, Bolden entered the military and served until he retired in 2004. During his military career, he logged more than 6,000 hours of flying time, including more than 100 combat missions during the Vietnam War. Bolden became an astronaut in 1981 and has logged over 680 hours in space during 4 space flights. In 2009, President Barack Obama appointed Bolden NASA Administrator, making him the first African American to permanently head the agency. Bolden has received honorary doctorate degrees from a number of institutions, including the University of South Carolina, Winthrop College, Johnson C. Smith University, and Monmouth University.