Trending
You are at:Home»365 DAYS-OF-HISTORY»August 11 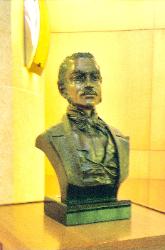 August 11, 1777 Free Frank McWorter, the first African American to incorporate a municipality in the United States, was born enslaved in South Carolina. In 1795, McWorter’s owner moved to Kentucky and took him along to build and manage his holdings and to lease him out to work for others. McWorter used his earnings to create a successful saltpeter production operation. By 1817, he had earned enough to buy the freedom of his wife and two years later he bought his own freedom. In 1830, McWorter and his family moved to Pike County, Illinois and in 1836 he founded the town of New Philadelphia, Illinois. By the time of his death on September 7, 1854, McWorter had bought the freedom of 16 members of his family. McWorter’s gravesite is listed on the National Registry of Historical Places and a portion of I-72 in Pike County is designated the Frank McWorter Memorial Highway. The New Philadelphia town site was listed on the National Registry of Historical Places in 2005 and designated a National Historic Landmark in 2009. McWorter’s biography, “Free Frank: A Black Pioneer on the Antebellum Frontier,” was published in 1983.