Trending
You are at:Home»365 DAYS-OF-HISTORY»August 10 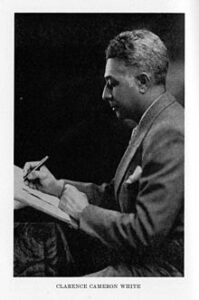 August 10, 1880 Clarence Cameron White, violinist, educator, and composer, was born in Clarkville, Tennessee. White started studying violin at the age of eight and in 1896 entered the Oberlin Conservatory of Music where he was the only black student in the orchestra. Before graduating, he left Oberlin to accept a teaching position. From 1924 to 1930, White taught at Virginia State College and from 1932 to 1935 at the Hampton Institute. White studied in Paris and at the Julliard School of Music and arranged many black Spirituals for voice and violin, including “Forty Negro Spirituals” (1927) and “Traditional Negro Spirituals” (1940). The 1954 Benjamin Award was presented to White for “Elegy,” a composition for orchestra. He is credited with more than 100 compositions, including an opera, “Ouanga,” which was performed in 1956 at Carnegie Hall and the Metropolitan Opera House. He also played at the White House for Presidents William McKinley and Franklin D. Roosevelt. His biography is titled “Music inside my Heart; Biography of Clarence Cameron White.” White died on June 30, 1960.