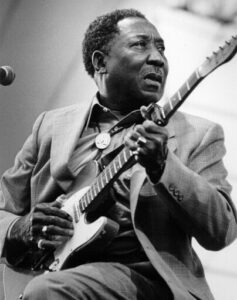 Muddy Waters, blues musician and “the Father of Chicago Blues,” was born McKinley Morganfield in Issaquena County, Mississippi. Waters started out playing the harmonica, but by age 17 was playing the guitar at parties. In 1943, Waters moved to Chicago and drove a truck and worked in a factory by day and performed at night.

In 1994, the United States Postal Service issued a commemorative postage stamp in his honor. His biography, “Can’t Be Satisfied: The Life and Times of Muddy Waters,” was published in 2002.