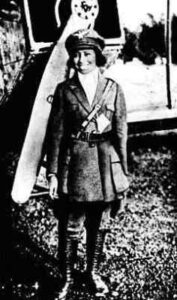 Elizabeth “Bessie” Coleman, civil aviator, died when her airplane crashed. Coleman was born January 26, 1892 in Atlanta, Texas. In her early 20s, Coleman became interested in flying, but could not gain admittance to American flight schools because she was black and a woman.

Therefore, she traveled to Paris, France where she learned to fly and on June 15, 1921 became the first African American woman to earn an international aviation license. After completing an advanced training course, Coleman became a barnstorming stunt flier known as Queen Bess. In 1990, a road at O’Hara Airport was renamed Bessie Coleman Drive.

In 1995, the United States Postal Service issued a commemorative postage stamp in her honor and she was posthumously inducted into the Women in Aviation Hall of Fame. Biographies of Coleman include “Bessie Coleman: The Brownskin Lady Bird” (1994) and “She Dared to Fly: Bessie Coleman” (1997). Coleman’s name is enshrined in the Ring of Genealogy at the Charles H. Wright Museum of African American History in Detroit, Michigan.