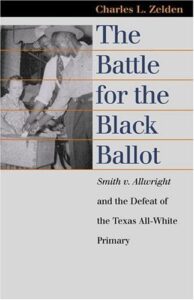 April 3, 1944 The Supreme Court of the United States in Smith v. Allwright overturned the Democratic Party’s use of all-white primaries in Texas and other states where the party used the rule. Lonnie E. Smith, a black voter in Texas, sued for the right to vote in a primary election being conducted by the Democratic Party.

Texas claimed that the Democratic Party was a private organization that could set its own rules of membership. Because the Democratic Party controlled politics in the South, Smith argued that the law essentially disenfranchised him by denying him the ability to vote in what was the only meaningful election in his jurisdiction. Thurgood Marshall, representing the NAACP, argued the case for Smith.

Smith v. Allwright, 321 U.S. 649 (1944), was a landmark decision of the United States Supreme Court with regard to voting rights and, by extension, racial desegregation. It overturned the Texas state law that authorized the Democratic Party to set its internal rules, including the use of white primaries. The court ruled that it was unconstitutional for the state to delegate its authority over elections to the Democratic Party in order to allow discrimination to be practiced.

This ruling affected all other states where the party used the white primary rule.The Democrats had effectively excluded minority voter participation by this means, another device for legal disenfranchisement of blacks across the South beginning in the late 19th century.

Lonnie E. Smith, a black dentist from the Fifth Ward area of Houston, and a voter in Harris County, Texas, sued county election official S. S. Allwright for the right to vote in a primary election being conducted by the Democratic Party. He challenged the 1923 state law that authorized the party to establish its internal rules; the party required all voters in its primary to be white.

The Democratic Party had controlled politics in the South since the late 19th century and the state legislatures of the former Confederacy effectively disenfranchised blacks in the period from 1890 to 1908, by new constitutions and laws raising barriers to voter registration and voting. This crippled the Republican Party in most southern states, and resulted in the only competitive elections being held as the Democratic Party primary. Texas had used poll taxes and the white primary to exclude nearly all blacks, Mexican Americans, and other minorities from voting.

Texas claimed that the Democratic Party was a private organization that could set its own rules of membership. Smith argued that the state by its law had delegated some of its authority to regulate elections to the Democratic Party, which essentially disenfranchised him by denying him the ability to vote in what was the only meaningful election in his jurisdiction.

The Court agreed that the restricted primary denied Smith his equal protection under the law (according to the Fourteenth Amendment) and found in his favor. It said that by delegating its authority to the Democratic Party to regulate its primaries, the state was allowing discrimination to be practiced, which was unconstitutional.

This decision enabled the revival of black participation in Texas politics, for those voters who could get through the discriminatory voter registration process. Smith’s efforts inspired Barbara Jordan, a Fifth Ward resident who would later become a black politician in Texas.