Trending
You are at:Home»365 DAYS-OF-HISTORY»April 2 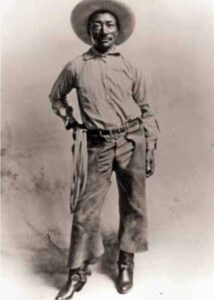 April 2, 1932 Willie M. “Bill” Pickett, cowboy and rodeo performer, died after being kicked in the head by a horse. Pickett was born December 5, 1870 or 1871 in Travis County, Texas. After quitting school, he took up ranch work. Pickett is generally credited with inventing the technique of bulldogging, grabbing cattle by the horns and wrestling them to the ground. In 1905, Pickett joined the 101 Ranch Wild West Show where he was a popular performer and toured around the world and appeared in motion pictures.

Because of his race, he often had to claim to be a Comanche in order to perform. In 1971, Pickett was the first black inductee to the National Cowboy Hall of Fame and in 1989 he was inducted into the Pro-Rodeo Hall of Fame. In 1994, the United States Postal Service honored Pickett with a commemorative postage stamp as part of the “Legends of the West” series. Several biographies have been published on Pickett, including “Bill Pickett, Bulldogger: The Biography of a Black Cowboy” (1977) and “Guts: Legendary Black Rodeo Cowboy Bill Pickett” (1994). Pickett’s name is enshrined in the Ring of Genealogy at the Charles H. Wright Museum of African American History in Detroit, Michigan.