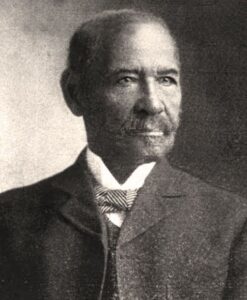 Mifflin Wistar Gibbs, businessman, politician, and the first elected African American municipal judge, was born in Philadelphia, Pennsylvania. After the 1849 gold rush, Mifflin moved to California where he became a successful retail merchant and a leader of the San Francisco black population.

In 1855, he founded The Mirror of the Times, the first black newspaper west of the Mississippi River. In 1858, he moved to Victoria, British Columbia to escape growing racial prejudice in California and in 1866 became the first black man elected to the Victoria City Council. Gibbs returned to the United States in 1870 and in 1871 settled in Little Rock, Arkansas and began to study the law.

He passed the bar examination in 1872 and in 1873 was elected Little Rock Police Judge, a position he held until 1875. In 1877, President Rutherford Hayes appointed Gibbs registrar of the Little Rock district land office.

President Benjamin Harrison appointed him receiver of public monies in 1889 and President William McKinley appointed him U.S. consul to Madagascar in 1897. In 1903, Gibbs founded the Capital City Savings Bank which by 1905 had deposits of $100,000.

The bank failed in 1908 and Gibbs died July 11, 1915. Gibbs published his autobiography, “Shadow and Light: An Autobiography with Reminiscences of the Last and Present Century,” in 1902.