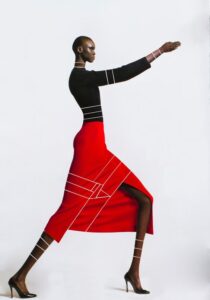 Alek Wek, model, was born in Wau, South Sudan. In 1991, Wek and her family were forced to flee to Britain to escape the civil war in Sudan. While attending college in London, she was discovered in 1995.

Wek moved to New York City in 1996 and her appearance on the November, 1997 cover of Elle magazine made her the first African to appear on the cover and one of the hottest models in the industry.

That year she was also named Model of the Year by MTV. Wek has gone on to model for many of the top fashion houses, including Calvin Klein, Christian Dior, and Donna Karan. Wek is a member of the U.S. Committee for Refugees’ Advisory Council which helps to raise awareness about the situation in Sudan and the plight of refugees worldwide.

She is also a missionary for World Vision, an organization that combats AIDS, and an ambassador for Doctors Without Borders. Wek published her autobiography, “Alek: From Sudanese Refugee to International Supermodel,” in 2007.