Trending
You are at:Home»365 DAYS-OF-HISTORY»April 14 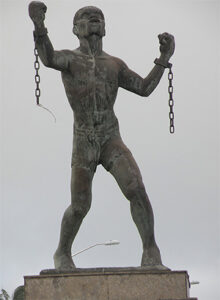 April 14, 1816 The Bussa Rebellion, the first of three large-scale rebellions in the British West Indies that shook public faith in slavery, started in Barbados. The rebellion was led by an enslaved man named Bussa who had been born free in Africa, but was captured by African slave merchants and brought to Barbados. Bussa commanded approximately 400 freedom fighters and was killed in battle. In 1985, the Bussa Emancipation Statue was unveiled in Barbados and in 1999 Bussa was named the first national hero of Barbados.