Trending
You are at:Home»365 DAYS-OF-HISTORY»April 13 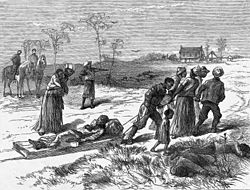 April 13, 1873 The Colfax Massacre occurred in Colfax, Louisiana when whites armed with rifles and a small canon overpowered black freedmen and state militia trying to control the parish courthouse after a contested election for governor. A military report to Congress in 1875 identified 81 black men by name who had been killed and estimated that 15 to 20 bodies were thrown in the Red River and another 18 secretly buried. An attempt to prosecute a few of the perpetrators led to the 1876 Supreme Court decision in United States v. Cruikshank, that the protections of the Fourteenth Amendment did not apply to the actions of individuals, but only to actions of the state. More information about the massacre can be found in “The Colfax Massacre: The Untold Story of Black Power, White Terror, & The Death of Reconstruction” (2007) and “The Day Freedom Died: The Colfax Massacre, the Supreme Court and the Betrayal of Reconstruction” (2008).