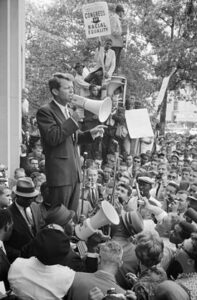 The Civil Rights Act of 1968, also known as the Fair Housing Act, was signed into law by President Lyndon Johnson. This act expanded on the Civil Rights Acts of 1866 and 1964 and prohibited discrimination in the sale, rental, and financing of housing based on race, religion or national origin. The act also provided for federal remedies if violated.

The Civil Rights Act of 1968, (Pub.L. 90–284, 82 Stat. 73, enacted April 11, 1968), also known as the Fair Housing Act, is a landmark part of legislation in the United States that provided for equal housing opportunities regardless of race, religion, or national origin and made it a federal crime to “by force or by threat of force, injure, intimidate, or interfere with anyone … by reason of their race, color, religion, or national origin.” The Act was signed into law during the King assassination riots by President Lyndon B. Johnson, who had previously signed the Civil Rights Act and Voting Rights Act into law.

Titles II through VII comprised the Indian Civil Rights Act of 1968, which applies to the Native American tribes of the United States and makes many, but not all, of the guarantees of the Bill of Rights applicable within the tribes (that Act appears today in Title 25, sections 1301 to 1303 of the United States Code).

A rider attached to the bill makes it a felony to “travel in interstate commerce…with the intent to incite, promote, encourage, participate in and carry on a riot”. This provision has been criticized for “equating organized political protest with organized violence”.

One impetus for the law’s passage came from the 1966 Chicago Open Housing Movement. Also influential was the 1963 Rumford Fair Housing Act in California, which had been backed by the NAACP and CORE. and the 1967 Milwaukee fair housing campaigns led by James Groppi and the NAACP Youth Council. Senator Walter Mondale advocated for the bill in Congress, but noted that over successive years, a federal fair housing bill was the most filibusted legislation in US history. It was opposed by most Northern and Southern senators, as well as the National Association of Real Estate Boards. A proposed “Civil Rights Act of 1966″ collapsed completely because of its fair housing provision. Mondale commented that:
A lot of [previous]civil rights [legislation]was about making the South behave and taking the teeth from George Wallace…This came right to the neighborhoods across the country. This was civil rights getting personal.”