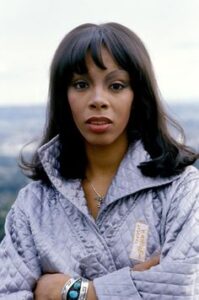 December 31, 1948 LaDonna Adrian Gaines (Donna Summer), the Queen of Disco, was born in Boston, Massachusetts. At 18, she left home for New York City and landed on the European Tour of the musical “Hair.” Her first solo single, “Sally Go Round the Roses,” was released in Europe in 1971. In 1975, “Love to Love You Baby” was released and went to number 2 on the Billboard chart. Other hits include “Bad Girls” (1979) which charted at number 1, “She Works Hard for the Money” (1983), and “Crayons” (2008). On December 11, 2009, Summer performed at the Nobel Peace Prize Concert in honor of President Barack Obama. Over her career, she has had 18 Gold albums, 11 Gold singles, and has received 5 Grammy Awards, including most recently the 1998 Grammy Award for Best Dance Recording for “Carry On.”

Kwanzaa – Kuumba (Creativity) The Karamu (Feast) is held on the 31st of December.  This usually incorporates seven things; food, drink, music, dance, conversation, laughter and ceremony.  Before leaving, each person should make an individual commitment for the coming year to community value.