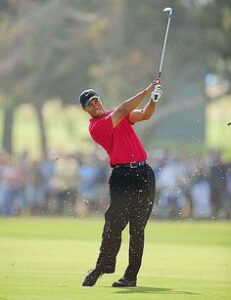 December 30, 1975 Eldrick Tont “Tiger” Woods, one of the most successful golfers of all time, was born in Cypress, California. Woods was a prodigy who began to play golf at the age of two, shot a 48 over nine holes at the age of three, and at the age of five appeared in Golf Digest Magazine. At the age of 15, Woods became the youngest ever United States Junior Amateur Champion and in 1991 was named Golf Digest Junior Amateur Player of the Year. Woods turned professional in August, 1996 and since then has won 71 PGA tour events, including 14 major golf championships, he has been awarded the PGA Player of the Year a record ten times, and he has led the prize money list a record nine times. Woods has also been named Associated Press Male Athlete of the Year a record-tying four times and is the only person to be named Sports Illustrated’s Sportsman of the Year more than once. In 2008, he was the highest earning professional athlete with estimated earnings of $110 million from prize winnings and endorsements. He has also been credited with increasing the popularity of golf amongst the general public and increasing overall prize money. In December, 2009 he was named Athlete of the Decade by the Associated Press. It is estimated that Woods earned $90.5 million from winnings and endorsements in 2010. The Tiger Woods Foundation was established in 1996 to focus on projects for children. They also provide university scholarships and operate the Tiger Woods Learning Center. In 2001, Woods published “How I Play Golf,” an instruction book which had the largest print run of any golf book.

Nia _ Kwanzaa (Purpose) Kwanzaa Symbols; Mkeka – Our History, Kinara – Our Physical Genetic Roots, Mshumaa – Our Social Roots, Muhindi – The Continuance of the Race, Zawadi – Our Tokens of Appreciation, Mazao – That Which Sustains Us, Kikombe – The Power of Our Unity