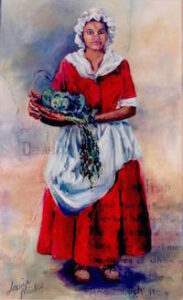 Terry was born in Africa, enslaved and stolen from there as an infant, and sold to Ebenezer Wells of Deerfield, MA. She was baptized at 19 in June 1735, during the Great Awakening, and at the age of 20, she was “admitted to the fellowship of the church.” In 1756, Terry married Abijah Prince, a prosperous free black man who purchased her freedom.

Their first child was born the following year, and by 1769, they had five others. In the 1760s, the Prince family moved to Guilford, VT. Lucy was well known for her speaking ability and she used her skills a number of times in defense of her family’s rights and property. In 1785, when a neighboring white family threatened the Princes, Lucy and Abijah appealed to the governor and his council for protection. The council ordered Guilford’s selectmen to defend them. She argued unsuccessfully before the trustees of Williams College for the admission of one of her sons, skillfully citing scripture and law “in an earnest and eloquent speech of three hours.”

Later, when a Colonel Eli Bronson attempted to steal land owned by the Princes, the case eventually made its way to the Supreme Court. She argued against two of the leading lawyers in the state, one of who later became chief justice of Vermont and she won. Samuel Chase, the presiding justice of the court, said that her argument was better than he’d heard from any Vermont lawyer. Her husband died in 1794, and by 1803, Prince had moved to nearby Sunderland. Prince rode on horseback to visit his grave every year until the year she died.

Although Lucy Terry was a poet, only one of her poems, a ballad called “Bars Fight,” has survived. She is known as the author of the first poem composed by an African-American woman. Lucy Terry Prince was a remarkable woman whose many accomplishments included arguing a case before the Supreme Court. Lucy Prince Terry died in 1821, at the age of 97.