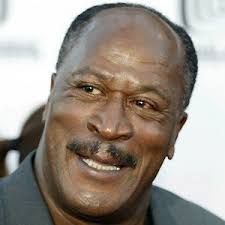 December 27, 1939 John Amos, Jr., television, film and stage actor, was born in Newark, New Jersey. Amos attended Colorado State University and Long Beach City College and briefly played professional football. He is best known for his roles on “The Mary Tyler Moore Show” from 1970 to 1973 and “Good Times” from 1974 to 1976. Unhappy with the scripts, Amos quit “Good Times” after the third season. Amos appeared in the 1977 Emmy Award winning television miniseries “Roots,” for which he was nominated for the Emmy Award for Best Actor, and has guest starred on a number of other television programs, including “The Cosby Show,” “The West Wing,” and “Men in Trees.” He has won more TV Land Awards than any other actor or actress. Amos has had roles in several films, including “Coming to America” (1988), “Die Hard 2” (1990), and “Dr. Dolittle” (2006). Amos is the writer and producer of “Halley’s Comet,” a critically acclaimed one-man play that he performs around the world. In 2009, he was the recipient of the New Jersey Education Association Award for Excellence.