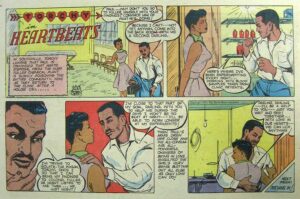 December 26, 1985 Jackie Ormes, the first African American female cartoonist, died. Ormes was born Zelda Mavin Jackson on August 1, 1911 in Monongahela, Pennsylvania. Ormes started in journalism as a proofreader for the Pittsburgh Courier. In 1937, her one-panel comic strip “Torchy Brown in Dixie to Harlem” first appeared in the Courier. Ormes moved to Chicago, Illinois in 1942 and began writing articles and a social column for the Chicago Defender. At the end of World War II, her one-panel cartoon “Candy” appeared in the Defender for a few months. In August, 1945, Ormes returned to the Courier with the cartoon “Patty-Jo ‘n’ Ginger” which ran for eleven years. In 1947, she contracted to have a Patty-Jo doll produced. It was the first African American doll to have an extensive upscale wardrobe. Today, the dolls are highly sought after collectors’ items. In 1950, she developed a multi-panel comic strip “Torchy in Heartbeats” which ran until 1954. Ormes retired from cartooning in 1956 and devoted the remainder of her life to the Southside Chicago community, including being a founding member of the board of directors of the DuSable Museum of African American History. Her biography, “Jackie Ormes: The First African American Woman Cartoonist,” was published in 2008.

Kujichagulia (Self – Determination) Brothers and sisters prepare for KWANZAA by fasting a week or so before it begins.  The fast is usually observed from sunrise to sun set.  After sunset the food eaten should consist of only fruits, vegetables and nuts (the advice of a physician should be sought prior to fast also).  Kwanzaa is celebrated for seven days, it starts December 26th and ends January 1 of each year.