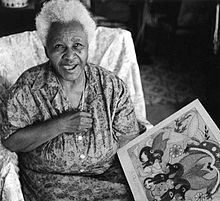 December 12, 1892 Minnie Evans, folk artist, was born in Pender County, North Carolina but raised in Wilmington, North Carolina. She began drawing on Good Friday, 1935 after she heard a voice that said to her “why don’t you draw or die?” Evans had her first formal exhibition of drawings in 1961 and her first New York City exhibition in 1966. In 1975, a major Evans exhibition was curated at the Whitney Museum of Art. Evans died December 16, 1987, leaving more than 400 artworks to the Cameron Art Museum in Wilmington. Today, she is recognized as one of the most important folk artist of the 20th century. In 1983, she was the subject of a documentary, “The Angel That Stands By Me: Minnie Evans’ Art” and in 2008 a retrospective book of her art was published. May 14, 1994 was declared Minnie Evans Day in Greenville, North Carolina and the Minnie Evans Art Center in Wilmington is named in her honor. Her biography, “Painting Dreams: Minnie Evans, Visionary Artist,” was published in 1996.